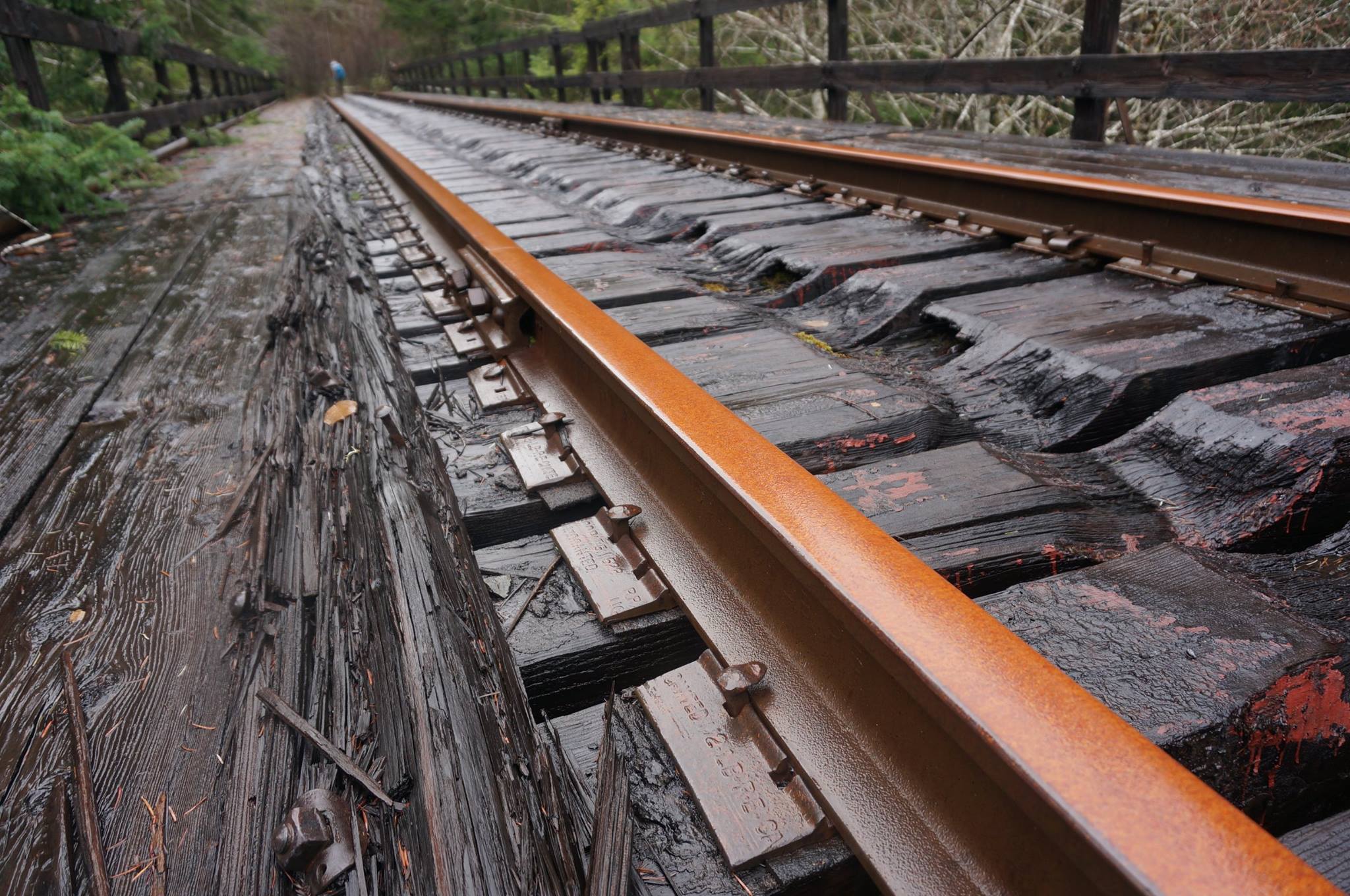 Sunday morning is a good time to be outside. As silly as it might be to think that the forces of nature could adapt to our own artificial creation of the weekly schedule, it seems to me that Sunday mornings are softer than other mornings. Birds take longer to wake from their slumber and water lies calmly on the banks. The world presses the reset button in anticipation of the week’s events. It was in this scene that I found myself, along with three fellow explorers, last Sunday.

We were nestled securely in our car as it zipped along through the creeping mist, slowing to weave our way through the network of potholed highways that always lead to adventure. High water obscured the long driveways of several roadside residents, and often as not mailboxes were accompanied by canoes ready to make the crossing.

Our destination was not a trail you will find in guidebooks. It did not have prominently displayed signs leading the way to a spacious parking lot with a trail map and a bathroom. Instead we arrived at a surprisingly well attended railroad crossing (several other more enthusiastic explorers having beaten us out of bed that morning) where we parked along an unpaved road and stepped out of our car into the squelching mess that is the ground of Oregon in January.

The crossing was devoid of signs or warning lights of any kind and it marked the beginning of our trail. The day’s trip was to be a scenic exploration of the Upper Salmonberry River as seen from the abandoned tracks of the Port of Tillamook Bay Railroad. Not so long ago these tracks saw frequent use by trains carrying lumber and agricultural products between Hillsboro and Tillamook. However, nature had other plans for this canyon and in early December of 2007 a series of storms which have come to be collectively known as the Great Coastal Gale brought heavy rains and hurricane force winds that lasted for several days. The onslaught of storms claimed 18 lives across the region and significantly damaged the railroad line along the Salmonberry River. 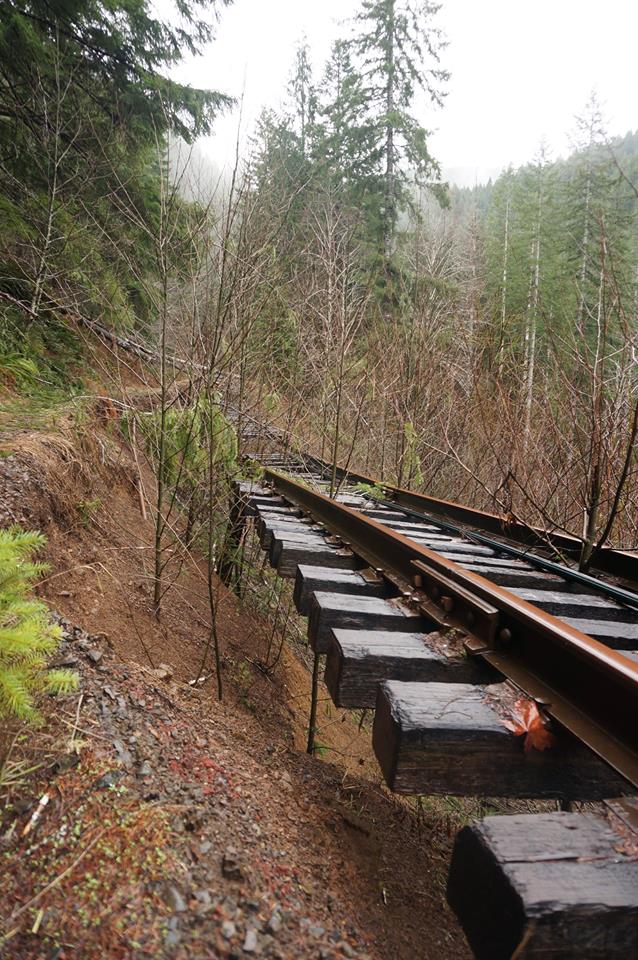 Today as you walk along the tracks you will find many sections dangling in the air above the voids created by large landslides and gradual erosion. These changes brought an end to rail traffic, but hikers as well as hunters and fishers, who had been allowed to use the tracks so long as they stepped aside for oncoming trains, continue to travel along the rusty lines.

Not much preparation went into our hike. I had heard allusions to the trail’s existence through social media and only confirmed these rumors the week before when a friend made the trek. Several online forums offer trail info for the hike under the names “Upper Salmonberry River” or “Wolf Creek Trestle”, which I had skimmed quickly, looking at pictures and confirming the start point. I knew there would be trestles, and I knew there would be tunnels, and I knew it would take us a couple of hours. With that knowledge in hand we set off down the tracks.

Not knowing any of the back story about the railroad at that time it was easy for us to imagine that it was the long deceased remnant of a bygone era. In my current conception of how the world works, railroads do not play a prominent role. They are often relegated to time gone by or sometimes, as depicted in the dark days of post-apocalyptic literature, they find a role in the days yet to come when weary travelers follow the lines from one city to the next searching for some stronghold of civilization. Both of these possibilities occupied my mind while we walked.

The temperature was somewhere between cold enough for several layers and not quite cold enough to wear gloves, and we walked and talked together, happy to be outside with friends. Before we reached the first tunnel we had already played with the manual rail switches, guessed at the weight of a track section and tested our balancing prowess.

Hiking in the woods is fun but walking into the darkness of the tunnel was what we had really come for. We chose not to use our headlamps and we stepped with blind trust from one railroad tie to the next. The enclosure was just long enough for you to to be consumed in darkness before you could see the other side, but thankfully not long enough to lose your mind. 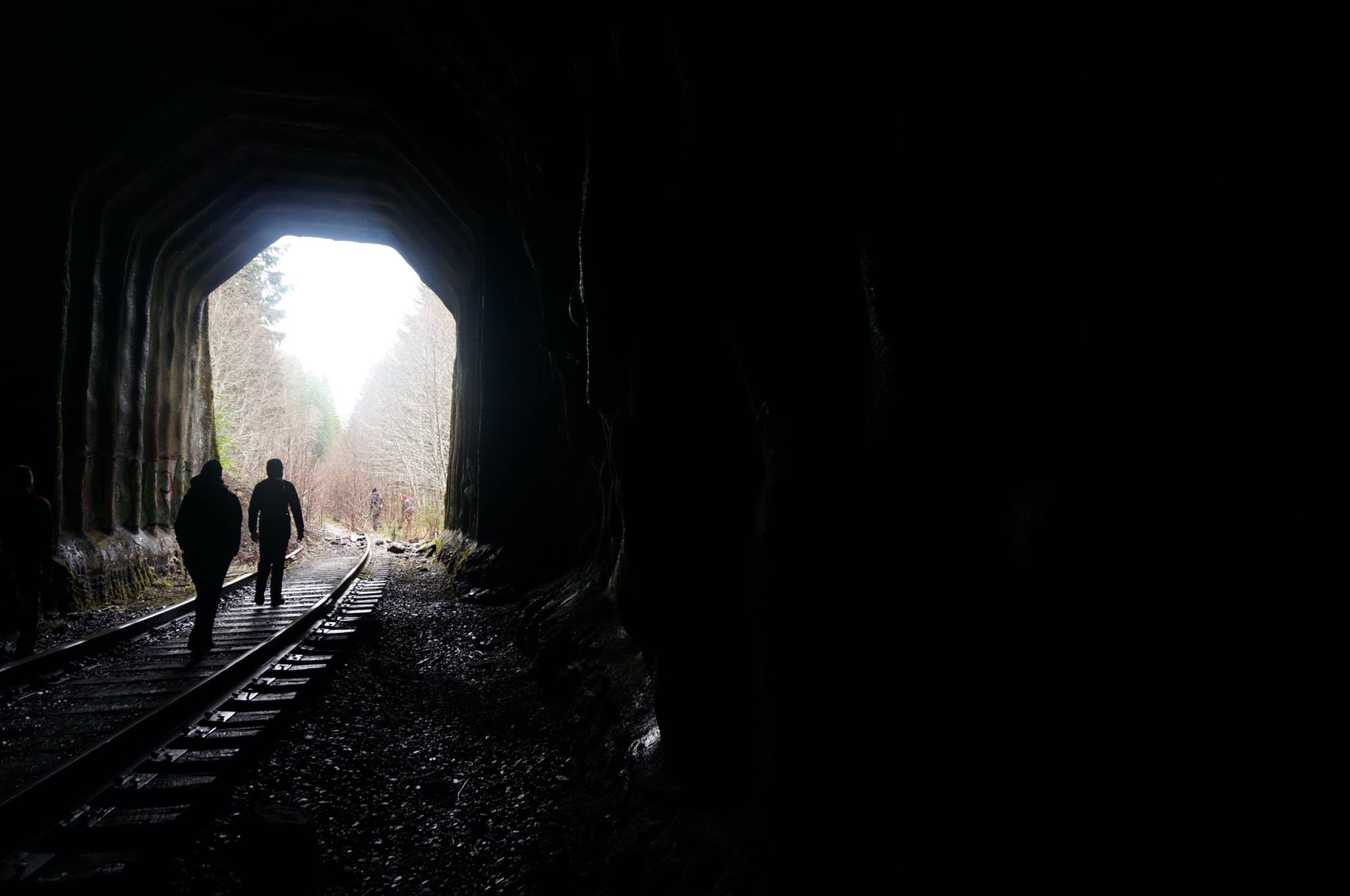 Following the first tunnel the trail gets a little more exciting with each step, like a locomotive gaining speed. Gradually, you start to gain elevation and you can sense the anxiety of the old conductors as they traversed the steeply graded hillsides next to the river. Weeping walls and waterfalls span the length of several of the adjoining cliff faces and overgrown brush forced us to sweep around the tracks through the occasional clearings.

Soon enough we came upon the most awe inspiring sight of the trip, the Big Baldwin Bridge. This trestle spans 520 feet and rises 167 feet above Baldwin Creek below. The massive metal and wooden structure is anchored at either end by water tanks, presumably to help fight the possible outbreak of fire. We were not alone on the deck of the trestle, as many other hikers enjoyed the beautiful views of the coast range and the slightly exhilarating feeling of looking down through the cracks that lie underfoot.

The trail continues its fervorous pace after leaving the Baldwin Bridge behind and at several points we had to carefully pick our way through the recent carnage of a great windstorm. One more trestle and one more tunnel followed in quick succession both carrying with them equal measures of fear and excitement. In total we walked about five miles and two and a half hours before we found a nice clearing with a makeshift bench and a view overlooking the Salmonberry where we chose to eat our lunch.

On our return we quickened the pace having caught a particularly virulent strain of “hiker’s hunger”. As a hiker yourself you may be familiar with this affliction, which causes woodland travelers to forgot all else in service to a quick trip to the car followed immediately by comfort food, in my case a burger and a milkshake. Nearing the end of the trail we all started to feel the fatigue of having walked for many hours on the sometimes awkwardly spaced railroad ties. However, in spite of our mutual exhaustion, upon reaching the car and relieving ourselves of our backpacks we found that we were all thankful for the opportunity to put our gear to use in a season when it often gets forgotten in favor of a comfy couch and a warm house. Lucky are we who live at the center of so many beautiful places, accessible year round.

Once toes were warmed and backs massaged we made haste for the shores of Manzanita where we feasted by the crackling fire in a delightfully Oregon pub. We did not arrive home until well after dark and upon waking the following morning we found the fullness of the day had left echoes in our aching muscles. Sore as we were, these are the kind of resonant memories I wish to carry home from each weekend living in Oregon. Hopefully, they can become your memories too. 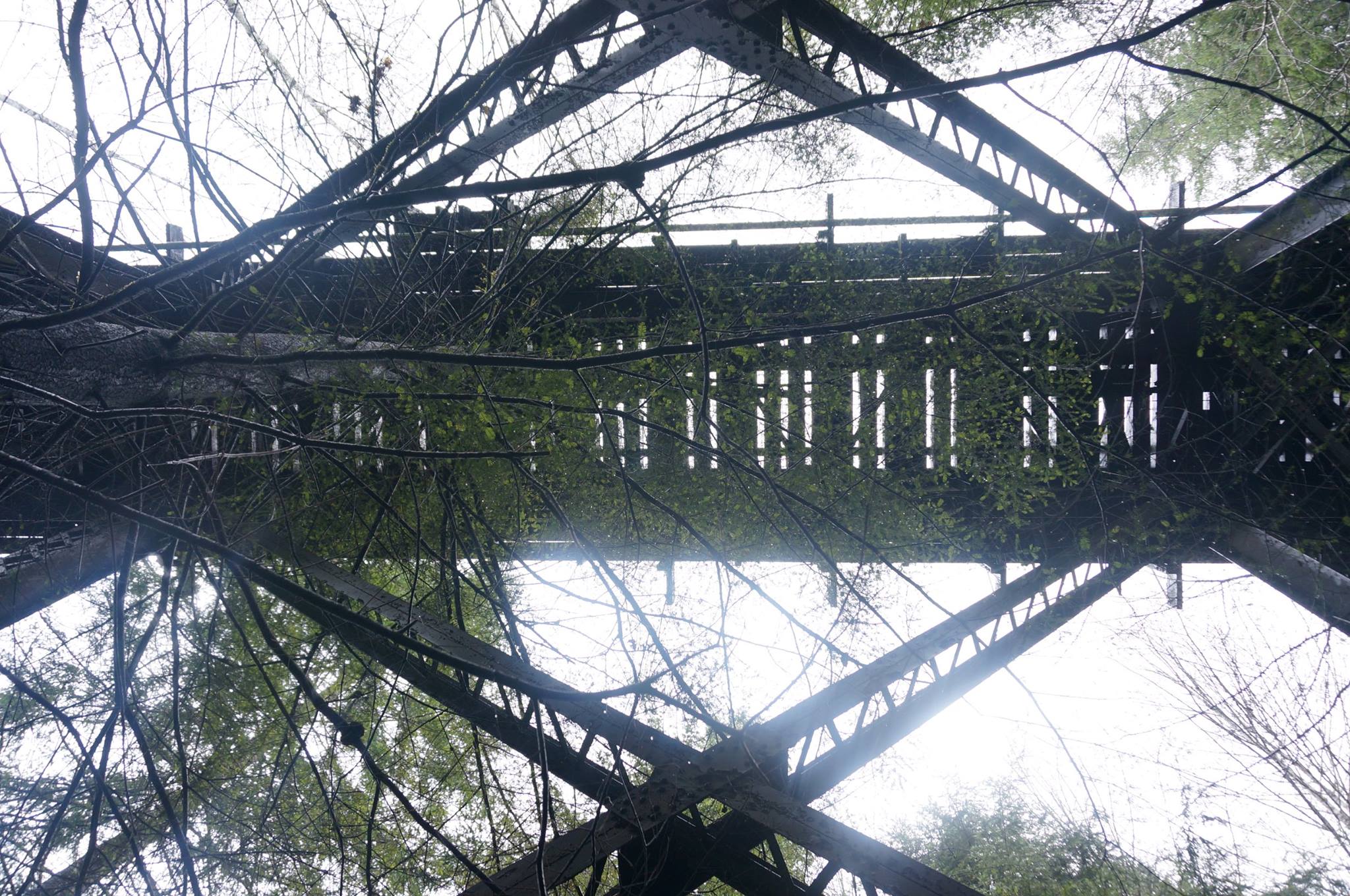