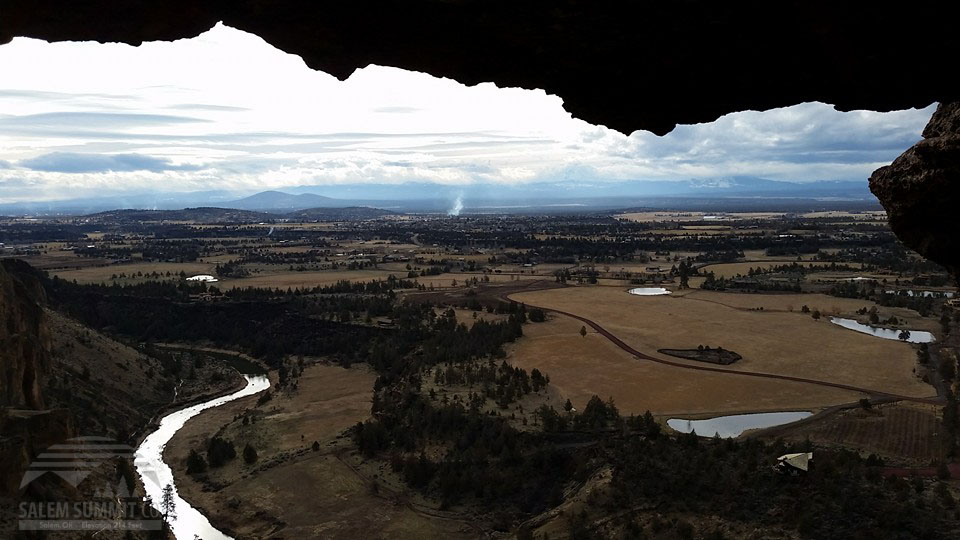 The view West from the Monkey’s Mouth

No matter how often I seek out thrilling adventures I am still filled with a flutter of wings at the start of each trip as the twin fuels of excitement and fear collide and mix in my belly. It is a feeling at once sobering and rejuvenating and I can see why the term addiction is so often used when talking about the passions we pursue. I wrestled with these emotions recently on a Saturday morning in early February as I travelled east over the mountains with two partners in search of adventure.

The valley was thick with fog and the headlights caught and jumped through the soup but as we climbed the foothills east of Salem the fog gave way to thin brushstrokes of pastels on the horizon and a silver moon hanging low over the mountains. Good omens for the day ahead of us.

We were bound for the red dirt and jagged spires of Smith Rock State Park in Central Oregon. For those readers that have not visited this wonder of our state, Smith Rock is a volcanic anomaly even among the crater strewn landscape of the Cascades. 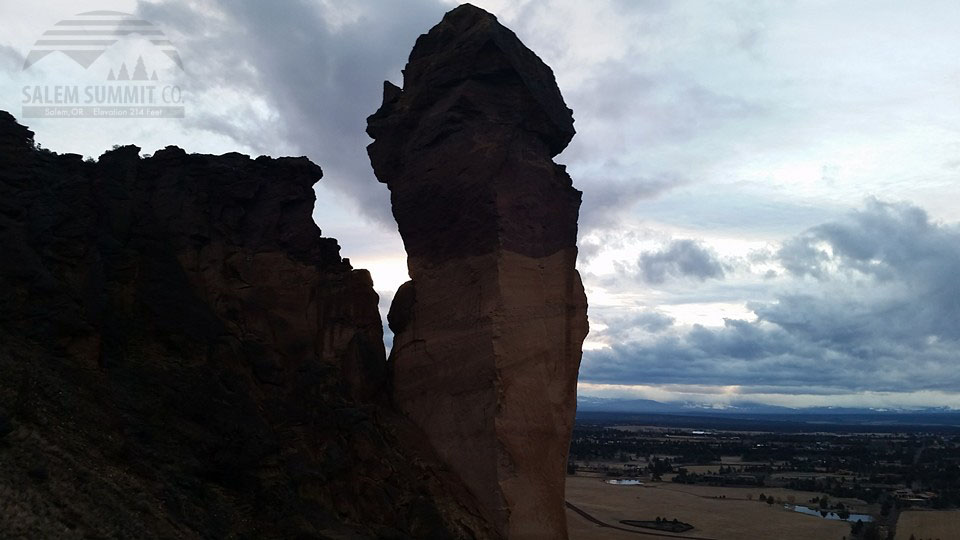 The iconic profile of the Monkey Face

Approaching from the southwest visitors descend through a series of benches to behold the undulating fin of rock that is the park. From a distance it looks like a giant ship carved from the bedrock, tacking southwest toward the ocean. Drawing nearer along the winding road, the rock transforms and the complexities of this formation are revealed. Smooth angular faces are offset by towering dark masses that look like giant drip-sand castles.

These rocks were formed millions of years ago when shifting forces within the earth lead to the collapse of a pocket of land in the region which was then liquefied and coughed up as volcanic ash. Once the ash solidified it was studded with a large number of xenoliths, literally “stranger rocks” trapped within the structure varying in size from large boulders to the tiny nubbins so famous on many of Smith Rock’s climbing routes. As the formation settled over time gas bubbles within the rock dissipated and left many holes in the rock face. Some of the holes are big enough to crawl into, and some are no larger than the tip of your finger.

These diverse geological formations concentrated in the easy to access flatlands of central Oregon made Smith Rock a rich prospect for the expanding culture of rock climbing in the 60s. In the early days it might have been a rarity to have more than a few groups of climbers at the park on a nice sunny weekend in the summer. These days, you might find yourself waiting in line for the popular routes at Smith. Luckily for us, February is not what most consider a good month for rock climbing. But, a nice sunny weekend and warmer than usual temperatures granted us a perfect weather window.

We had set our sights on one of the most iconic spires that Smith has to offer, the Monkey Face. Our objective, the “Pioneer Route”, was the first line established on this freestanding column and was forged at the dawn of 1960’s following the earnest efforts of some of the Park’s most notable forebearers. It has since stood as a popular challenge for beginners and experienced climbers alike. One of the reasons it has remained so popular is that it incorporates several different climbing disciplines. Climbers will experience traditional climbing, placing their own protection on the first few pitches, followed by aid climbing as they ascend using nylon ladders into the cave known as the Monkey’s Mouth, and finally a 140 foot free rappel back to the base leaves the climber dangling in space admiring the column they worked so hard to climb. 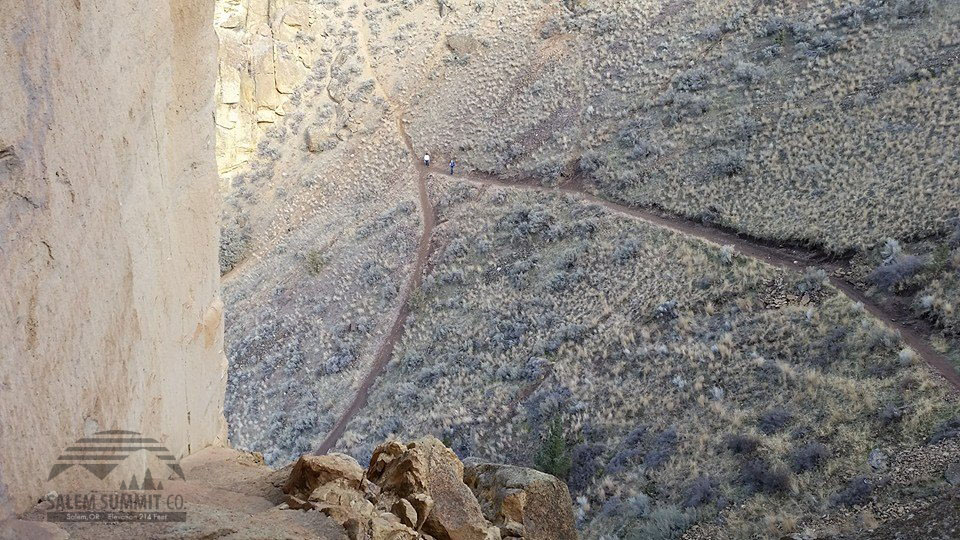 Peering down from the top of the first pitch

As we hiked into the base of the route we only spotted a handful of other climbers lucky enough to share the beautiful weather with us. This was my first attempt at a multi-pitch route where I would find myself suspended on the rock face over a hundred feet in the air. The calm morning and solitude made the scene seem not too different from the early days at Smith.

We piled our bags on the small ledge at the base of the wall, sifting through our gear and pairing our belongings down to what would fit in one bag for the ascent. Jittery hands made for a slow start but once we found a rhythm we quickly ascended out of the shade and around the corner onto the sunlit South Face. The rock dropped away below us down toward the river and the clear skies provided us great views of The Three Sisters and Mt. Jefferson.

Feeling our way up the sloping wall we passed through generations of climbing hardware. Old angled bolts rattled against the rock having come loose through decades of use. Faded and weathered nylon slings fluttered like banners in the wind. 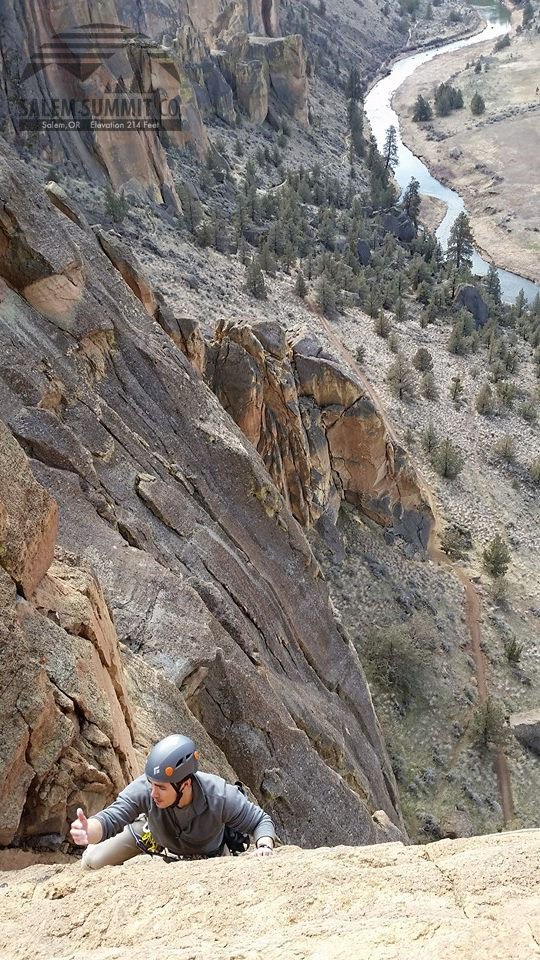 Fellow adventurer, Mark, finds his way up the second pitch

As beautiful as the day was, the scenery disappeared as I faced the rock and organized the gear on my harness in preparation for the aid climbing portion of our ascent. In contrast to the free flowing movements of sport climbing where a climber must gently shift their weight and find an artful line up the rock, aid climbing is a routine. Improvisation is replaced with the steady process of clip, climb, hook, rest, repeat.

I fought for every foot of climbing and by the time I made it to the top of the pitch the jittery feeling from the start of the day had returned along with a little exhaustion and some sore toes. But, as I waited in the mouth of the cave looking west toward the Cascades and sipping some warm soup I brought with me, life seemed pretty good.

I led the next pitch stepping out of the relative safety of the cave into instant exposure on what’s known as Panic Point. Large as the holds might be, when there’s nothing but air below you for 100 feet, confidence does not come easy. The last few pitches were short and soon enough we were standing on top taking in the view. The sun was starting to slip low in the sky and the red dirt of the hills was made golden in its light.

We savored the summit long enough to snap a few pictures and discuss our plans for the descent. One short rappel to the edge of the pillar’s crown set us up for the long rappel back to the base. We tied our knots and tugged our ropes more than once, and when we were confident that we had done what we could to avoid disaster we backed over the edge into the void.

We descended the Monkey Face as better climbers, closer friends and thankful Oregonians. The imagery of the day was temporarily overtaken by another addiction, milkshakes, but as soon as that desire had been fulfilled I was once again casting my thoughts into the wilds of Oregon. The next adventure will come soon enough, but until it does Smith Rock has given me plenty of fodder for my imagination. 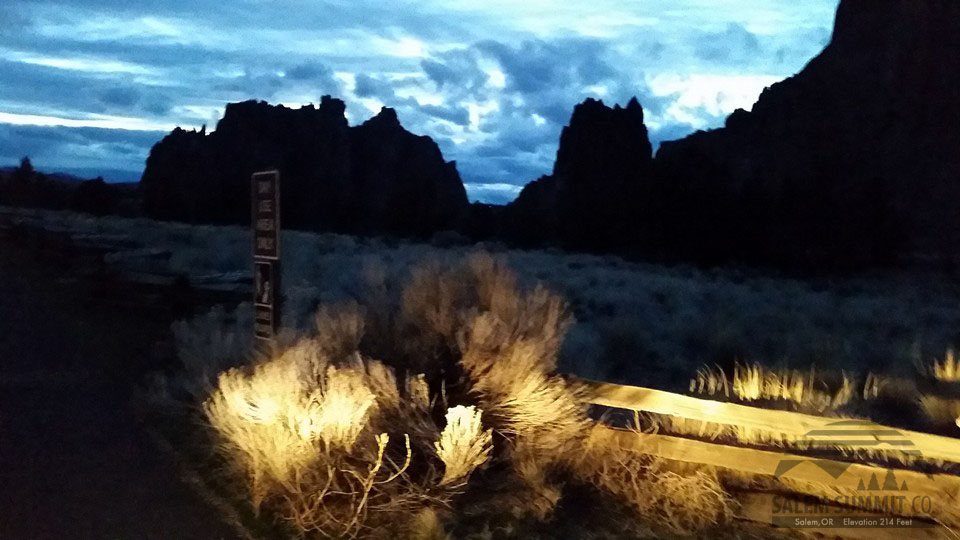