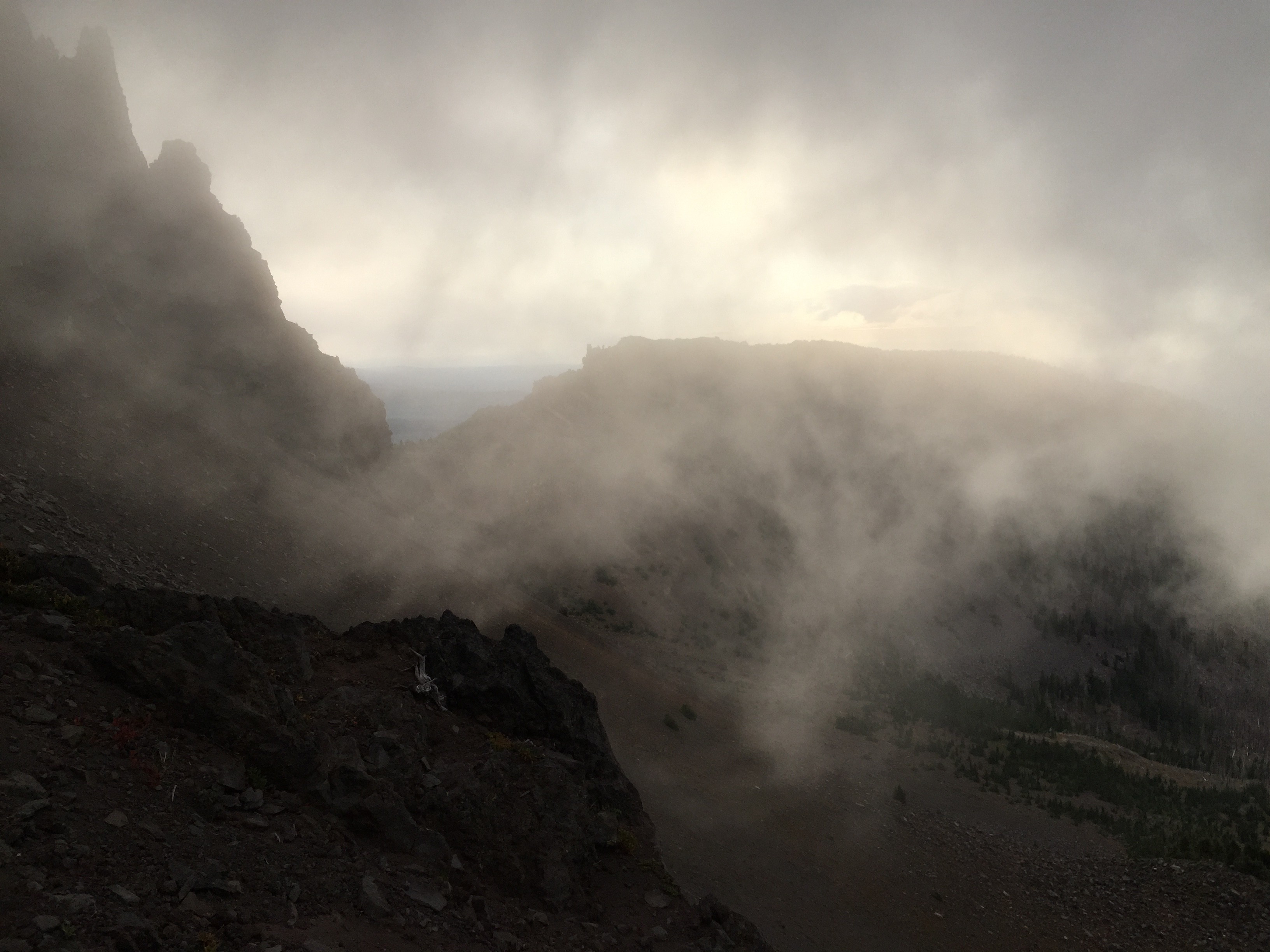 It was never really about summiting a mountain, a 7800 foot pile of rock. It was about a challenge of whether or not I could hike that far and climb that high against the voices telling me there were easier paths to take in life.

The idea was set upon me from a rock climbing trip out to Smith Rock, after 2 days of amazing climbing and rappelling, when one of the trip leaders suggested I join them for a summit of Three Fingered Jack at the end of June. One woman on the trip, graciously offered to teach me a few rope moves I would need on the technical climb of the mountain peak before the trip, assuring me that I would be fine, based on my basic rock climbing skill. Why not? I had always been fearful of doing any snow summits, but this would be late June, and after the dry hot summer we had already had in Oregon, there would be no snow to combat.

After a quick introduction to prusik knots and rappelling on a Friday in Eugene at the Columns, I met the rest of the carpool group at the grocery store in Springfield at 6 p.m. on a hot summer night. The group was comprised of our leaders (a husband and wife) and 2 young hikers, one in college and the other just out of college. By the time we traveled the 2 hours to Santiam Pass, it was considerably colder as we set up our tents at the trailhead of the Pacific Coast Trail. Dusk was setting already and the visible burnt trees were stark against the horizon of Mt. Jefferson in the distance. We ate standing by our car before heading to our sleeping bags by 9 p.m., knowing that an “alpine summit” of 3:30 a.m. would come all too early.

It was an extremely windy night, and I listened to the tent rattle all night as I tossed and turned. I wasn’t worried about not being able to make it to the top. I was worried about being the slowest one of the team. We had the two leaders who summit peaks almost every weekend while volunteering for Eugene Mountain Rescue, along with a young man majoring in psychology who seemed mature and wise beyond his 19 years, and a 25 year old student who had graduated and started a career with Planned Parenthood. Another young man, in his mid-20’s had driven down late from Corvallis and met us at our campsite before we turned in for the night.

We woke at 2:30 a.m. and put away our tents and ate a bit of breakfast. I took time to notice that the stars were amazing, bright and clear. It was quiet and dark when we set out at 3:45 with only the light from our headlamps into the sandy trail of the PCT.

During the first 2 hours I thought about how I could casually quit and head back almost every 4 minutes. My headlamp was horrible. I kept tripping over logs while trying to figure out my new trekking poles while trying to avoid stepping on toads and horse poop. I was hot in my winter puffy coat and was so grateful when we finally stopped after about 20 minutes to unlayer. And then the trail went on. We went on. What else is there to do? The only way was one foot in front of the other. 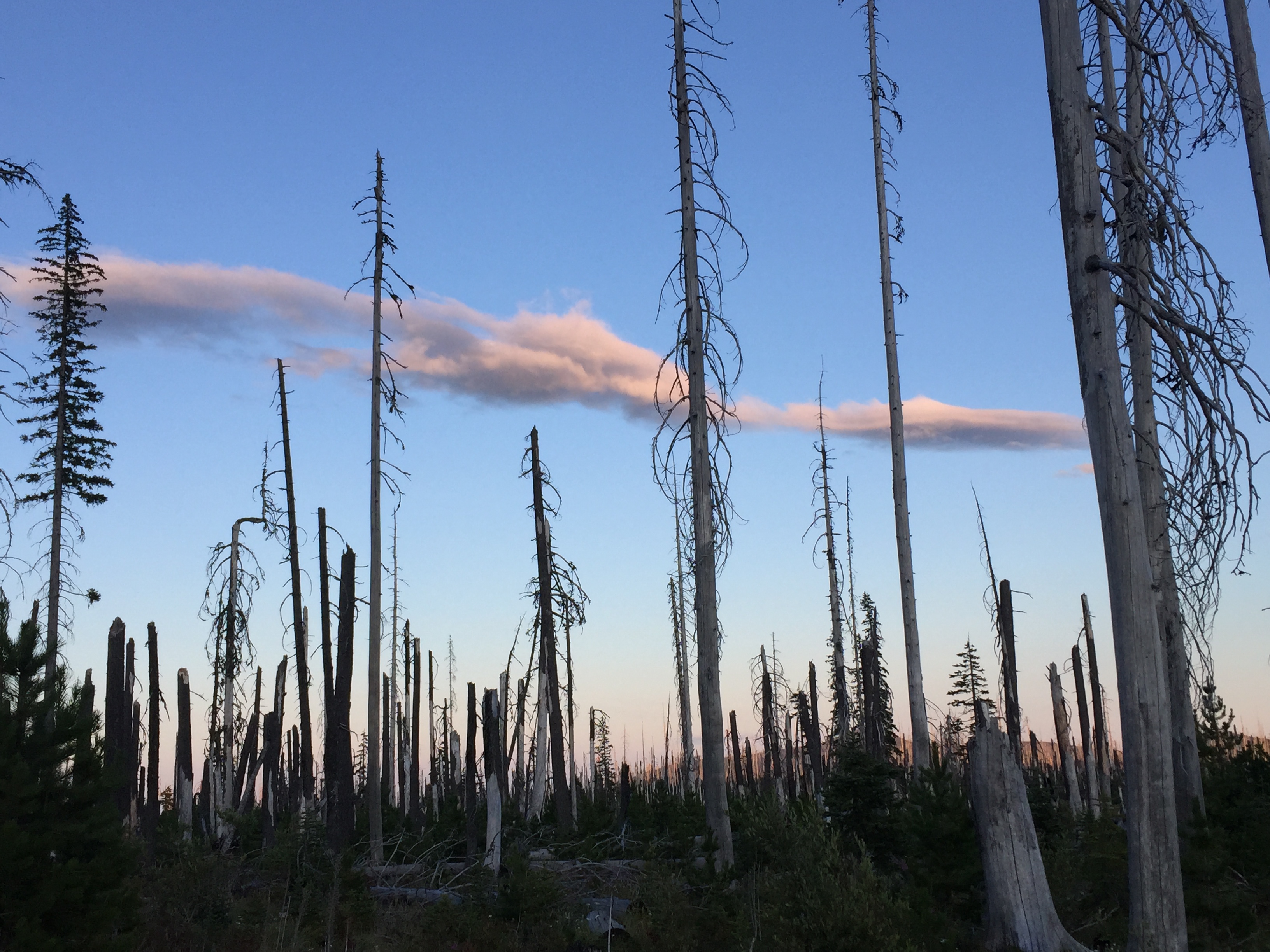 Finally the sun came up and I felt like things shifted for me. I was several miles and several hours in and we were now in the tree line and the forested area, and things were beautiful. I could do this.

We got to the climber’s trail at 8 a.m. It was a very steep 1 mile climb to the top, up what seemed like a giant sand dune. Instead of an ocean there was only more rock. We got to the top area where it shifts to rock, some stable, some very fragile. Then, passing a corner, we were suddenly on an exposed ridge, overlooking the beautiful mountains and lakes below. Clouds seemed to be among us, as well as a sharp cold 35 mile an hour wind. It was breathtaking and terrifying. I was suddenly very reliant on my trekking poles, hoping they would prevent me from falling off balance and falling off the side of the mountain. Of course, tons of people summit this peak, and it’s just fine. But, I am from North Dakota. There are no mountains, not even hills. Overpasses and ditches were the biggest slopes I encountered. Here I was, at 7300 feet, above the forest, closer to the sky as I have ever been, and I was in awe, and constantly worried about what was next.

We all stopped to shift layers, and when the young girl on our hike went to put her pack back on, she twisted her back in a wrong way, and suddenly needed to lay down. She began to stretch in hopes that her back spasms would quiet. The boys went on ahead. I wasn’t sure what to do but I knew I was slow, so I decided to follow, thinking that rest of the team would soon follow. I crossed a dead tree, then scrambled up the steep black rocky slope. The boys were all several feet ahead. There was no one behind me. There was no going down on my own, I was too afraid slipping on the steep rock. I had no choice other than to just keep going as the 35 mile an hour wind pelted me into the mountain slope. At the top, where the “cave” began was where the traverse rope would be setup. The plan had been to setup the 2nd rope, in order to ascent the 5.3-5.4 climb to the summit, where, at most 2 people would fit. In my head, I was hoping we would go back down. I knew it was dangerous and windy and I sensed after minutes had passed that the team from below was not going to come.

Then our female leader called to us from below saying to come back, saying our team member was hurt and we couldn’t go up. I was relieved but concerned. Even if she hadn’t been hurt, there was little hope that we would have been able to summit, as it was just too windy, cold and exposed for a safe trip.

Luckily, our injured teammate was able to still walk despite the pain and we all took pieces of her backpack so she wouldn’t have any extra weight. The young college student was the one who stepped up the most to carry it. He could have been spending his Saturday morning sleeping in until noon after a wild party night, but instead, he had gotten up at 2:30 a.m. to eat cold ravioli from a can in his tent to climb a mountain.

We glided down the scree. I learned how to lean into it and just enjoy the easy ride down, wishing I had gaiters like the rest of the hiking crew.

At the bottom of the scree, I emptied my shoes of rocks and pebbles, and we went down the next 4 miles in daylight, through amazing overlooks, through miles of sand and bright white skeletons of dead trees left standing from the forest fire 15 years ago.

As I had hiked, alone with people but with really only my own thoughts, I caught a glimpse of what the through hikers must be left alone with each day. The pain, the beauty, the boredom and desire to quit, go back to a soft bed and a warm meal. “Wild Geese” by Mary Oliver, was on repetition in my head, “You do not have to be good…you do not have to walk a hundred miles on your knees through the desert repenting, you only have to let the soft animal of your body love what it loves….” And Cheryl Strayed’s quotes from her book Wild, “What if I didn’t need to be redeemed? What if I already was?” Somehow in the woods it seemed to be the perfect time to reflect and think back, to darker moments of my own life. What if everything, every mistake, every lost moment, every lost chance and love, led me to this moment and this person I am right now?

My toes hurt, my back hurt, I was tired and hungry and I was grateful when we arrived at the cars at 11:00 a.m. I couldn’t believe it wasn’t even lunch time yet, and I had hiked 10 miles, climbed over 2,000 feet, and experienced all of this on just a small portion of the Pacific Crest Trail. 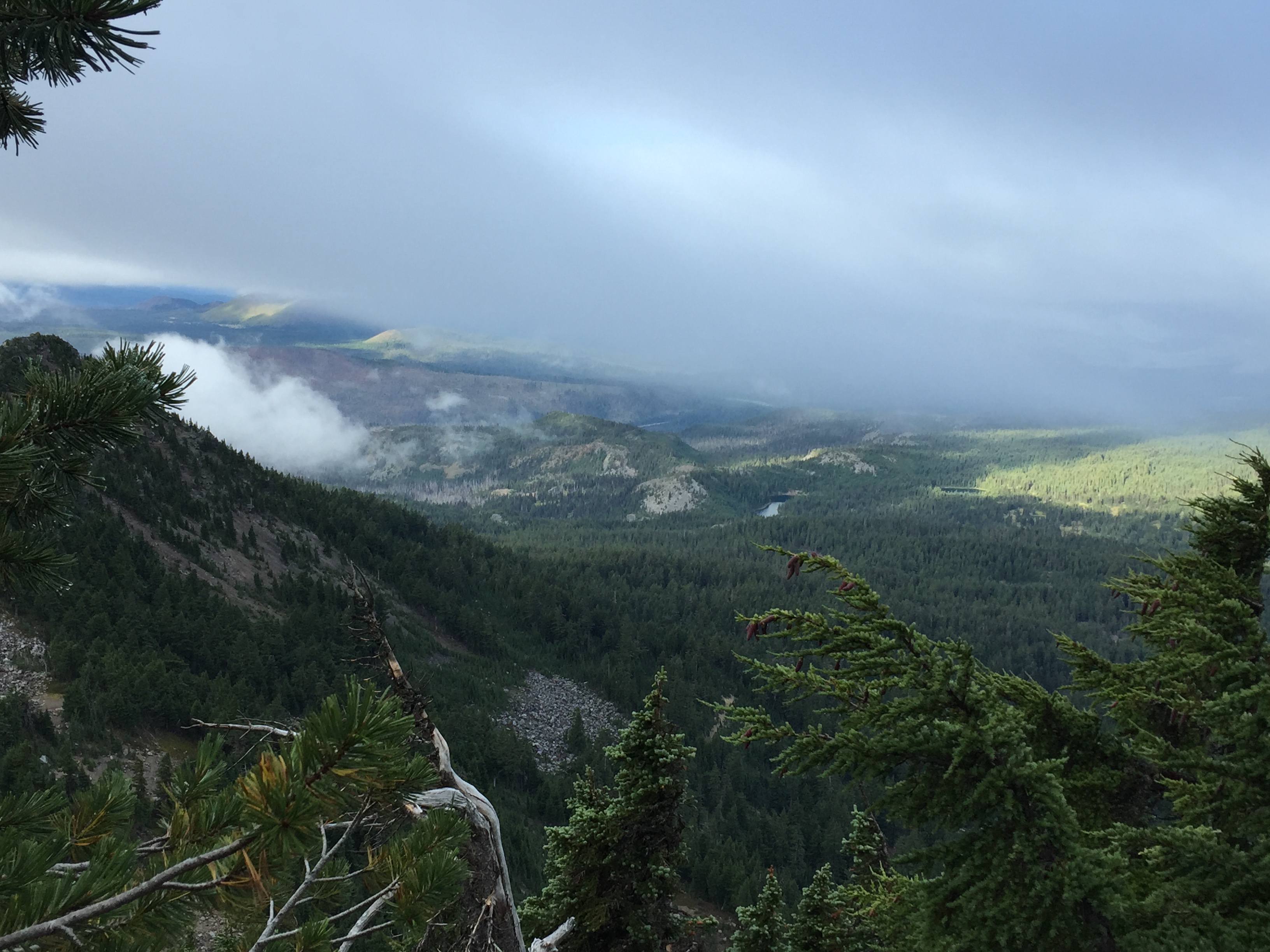 Mountains aren’t made to be conquered. Three Fingered Jack didn’t care that we didn’t touch the peak, even though maybe I will another time. I didn’t conquer a pile of beauty and majestic rock, but I proved something to myself. I was stronger. I was out here trying with a group of people who were all conquering something of their own private accord. Even though nothing about the day was “fun”, it ends up on my top list of experiences out west so far. These people I had only know for a brief period of time had demonstrated that on a climb, the team is more important than a summit or any individual. At any moment things can change from light-hearted and happy to fear. Everything is known and unknown. People will always surprise you. Heroes aren’t that hard to find, when it sometimes only means a kind gesture and a willingness to teach.

On the mountain, as in life, the only thing you have in your control is yourself, your attitude, your level of preparedness, and your experiences. Accepting that will only make you more open to what the trail and the world gives you.

Attempting to summit a mountain creates a burning desire to conquer more. My memory quickly forgot the pain and fear and now easily remembers the adventure and beauty. With each step, each switchback, each blistered toe, there are lessons to be taught. Lessons I haven’t yet truly learned.