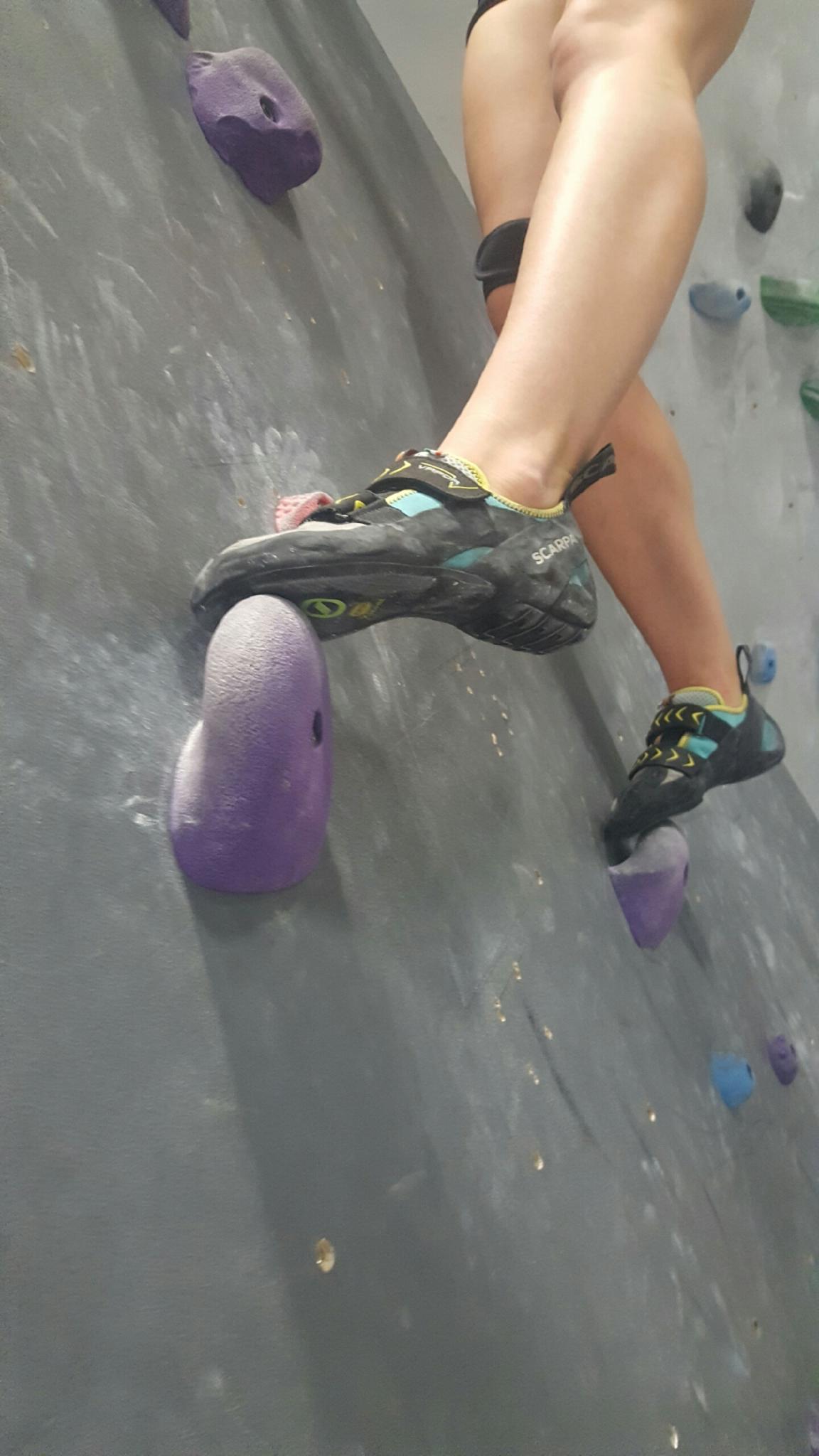 I’ve been rock climbing on and off for about three years now but in the last four months  my climbing skills have really improved as I began to focus on areas like technique, footwork and overall body awareness.

I’m proud of the ways I’ve developed as a climber – nothing makes me feel stronger than when I continue to advance to harder grades.. And to reward myself for all of my hard work, I went out and bought myself a new pair of climbing shoes: The Scarpa Vapor V’s.

To talk about the Scarpa Vapor Vs, I have to talk a little about the pair of shoes I bought when first learning how to climb, the La Sportiva Tarantulace. The Tarantulace is a good shoe, especially for novice climbers. And that’s what I was when I bought them. They’re a neutral shoe, which means they have a flatter profile and will provide the beginner climber good all-around climbing performance. In other words, they are a great introductory shoe. I still wear them often. I love them; they’re comfy, broken in and reliable. Nothing better than that.

The Scarpa Vapor Vs are a more aggressive shoe with a downturn in the toe box, allowing my feet to grab and pull onto holds better, rather than just standing on them. In climbing, how you position your feet on a hold determines how well you can pivot your hips, balance, or do a foot-switch to the next hold. With the Scarpa Vapor Vs, I feel more in control of how and where I position my feet because of their pointy tip and downturn, and feeling confident in my footwork translates directly to my overall confidence as a climber.

Now that the shoe is mostly broken in, I am beginning to appreciate them more. When I first tried them on, they were tight. Like toes crammed against each other, bent in half, a burning sensation if I tried to walk in them tight. It actually had me discouraged. Had I bought them too tight? Would they ever stretch out so I wouldn’t wince in pain at every step I took? When I initially decided to buy a second pair of climbing shoes, I knew I wanted them to be more aggressive and snug – my La Sportiva Tarantulaces are pretty loose now that they are broken in and well worn, and that was an issue I did not want to come across with my second pair of shoes. So when I bought the Scarpa Vapor Vs, I bought a size that was painfully small for my feet, a decision that made me hesitate many times before actually buying the shoes. All climbing shoes stretch at least a little after they are broken in but it’s hard to know how much they will stretch, and this can make it difficult for a final decision in what size shoe to buy.

Climbing in these new shoes was a whole other story. I could barely make it up an easy route without cringing in pain and the instant I was on the ground, those shoes were ripped off my feet in earnest.

My new climbing shoes looked cool but I was beginning to wonder if they would become just an aesthetic.

A few more weeks of wearing them when my feet were sweaty, of wearing them with thick socks on while watching TV, and climbing in them (painfully so), and they’re feeling decent. Yes, my toes are scrunched up still but not nearly as much, and they no longer burn when I stand up on small footholds. As a more aggressive shoe, I’ve been told they aren’t meant to be comfortable, but they also aren’t meant to be painful.

Strictly speaking on aesthetics, the turquoise and yellow scheme of the shoe was also what drew me to them.Physical appearance was, admittedly, a huge factor in deciding that it was the shoe I wanted. Because who doesn’t love looking good while climbing? Granted, choosing a shoe based on appearance alone isn’t something I would suggest to anyone – how the shoe performs is the most important aspect in deciding which new climbing shoe to get. For me, I settled on the Scarpa Vapor Vs not only because they looked cool but more importantly because they are great for an intermediate climber. 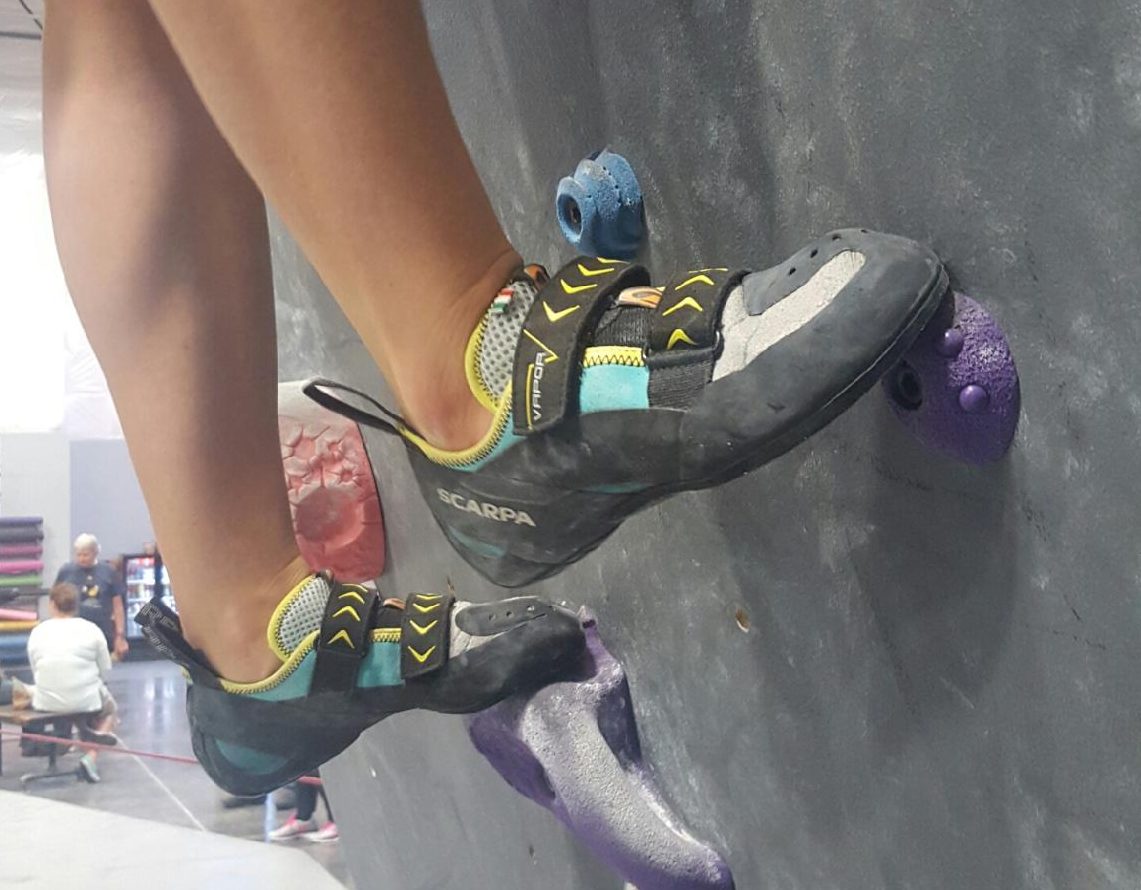 Additionally, I have to express how much I love that these shoes have velcro instead of laces.There have been numerous times where my Tarantulaces have come undone mid-climb and I have to reach down, fifty feet in the air, and attempt to retie them (it’s quite a feat if you’ve never experienced it).

There are still some quirks to my new shoes, like how snug they are in the heel, and the suction phenomenon that happens when I walk in them but overall, none of that bothers me too much, nor does it impede me in my climbing.

It’s fun buying new climbing gear, and it’s even more fun using it. If you end up buying the Scarpa Vapor V’s – or any climbing shoe for that matter – don’t despair during the breaking-in period. It will pass, I promise. But make sure to get fitted correctly; wearing the wrong size of climbing shoe is not a good thing. Climbing shoes are supposed to be tight yes, maybe even a little uncomfortable, but not painful. Swing by Salem Summit Co the next time you’re downtown and we’ll get you fitted for your first, second or tenth pair of climbing shoes.