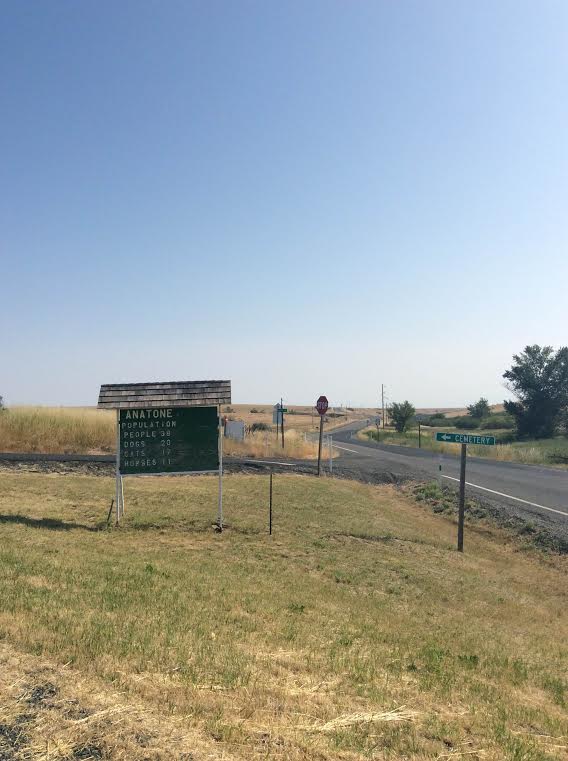 I was raised by streams of water. Towering giants reached to the heavens above me, centuries of song from the earth to the sky. Songs of water, rising softly from every living cell, and falling again, from dense clouds never seeming to end. Come summer, the song turned low, a hum shared under the canopies of trees and along the sides of rivers, cool and moist while the grass turned brown under long days of sun.

I started feeling ripples of change years ago. Spring came earlier, fall later, summer lived longer and hotter than I ever remembered. On my first bike tour, I rode to Missoula and back through the the month of September, and didn’t see a drop of rain. Late summer in a dry country.

Since that year, I have crossed much of the Columbia Plateau, following the Snake to its source, the Flathead to the confluence of the Clark Fork (a place called paradise), and the path of the great glacial lake Missoula floods, canyons torn with the ending of the last ice age, giving shape to the lifeblood of this place, the Columbia. All of these places have taught me songs of the land.

I have learned the song of thirsty land.

This summer past, I felt called to journey from my home. What started as a weekend bike trip to the Ochocos grew to an aching yearning forward, to the unknown. It was not a yearning for a where or why, just a singular calling outwards through my consciousness. As I left my friends by the side of the Prineville reservoir, the endless dry beauty of the landscape revealed itself, with every turning of the wheel, every stroke of the pedal. Days passed with mountain ranges, Ochocos leading to the Painted Hills, Smoke in the Strawberries and the shadows of the Elkhorns into the Wallowas. The fourth of July came on the banks of Lake Joseph, Crystalline cool water beneath hot days. Music and food and plenty of beer to go around. I slept that night in a teepee outside of the Nez Pierce interpretive center, and woke far too early to sprinklers soaking all of my things. I spent a few days in the area, camping up Hurricane Creek, the spirit of the place seemed to embrace me. When I was ready to go, though, the movement came willing. It was morning, squatting on rocks to fill my kettle from the creek, and my legs started quivering, rippling in readiness. When movement calls, the body follows.

I went North through the Blue Mountains, chasing the morning hours. Midday was too hot to move, but where water met the surface, willow trees breathed cool air in maddening heat. Movement again in the lower beams of the sun, on to the edge of Chief Joseph’s canyon. That was where the Ni Mi Poo spent their winters, and where the cavalrymen burned their cache of camas, signaling the end of an epoch. If god were made of stone, all of heaven could be seen from that canyon rim. Where the Grande Ronde has cut its way through, 3000 feet of drop lies from one side to the other. The walls start with sparse pine along the top, and end with sheer basalt faces at the the bottom, soaking in the heat of the sun so long as it shines. Night was coming and I turned my wheels downhill. Hot wind drying sweat to salt, speed climbing with quick down beat pedalstrokes. Turning and turning for miles.  Pockets of cool in the shade of pines, more hot breath on the other side. Down to where temperature knows no time, and time knows no end. Where a vein of life cut through the heart of stone.

I set up camp by the riverside. Swimming by twilight, heat radiating off tall walls, birds and insects singing for life. I have learned the song of water in thirsty land.

6:00a.m. and 80 degrees, the sooner on the road the better. Thirteen miles of climbing starts with a pedal stroke, and many turns pass to reach the top. It is the space between that meaning is found. From the bottom, everywhere you go is up. Such is the way of the valley.

Reaching the top, celebrate with snacks. Drink of water on Rattlesnake summit, all downhill to Anatone. Passing ghost towns and burned fields, moving fast. As the grade steepened, the Snake river valley opened beneath. Rolling to the desert snake, drafting cars on switchbacks, coming to oasis in thirsty land.

On my way into Clarkston, the little that remained of an osprey lay on the side of a road. I picked up its wings, dried and separated, and cast them in the Snake as I passed to Idaho. Final rest in its place of life.

With the heat of the day looming high, I found a quiet cove in Lewiston. I played banjo to a town desperately in need of song, where it seemed the hot-dryness had reached the people’s minds.. As the day began to cool, I made East to the Clearwater. The rolling river ran starkly living against barren walls. Weeks without rain and heat unusual in a dry land had the river running low, but still glacially cool. I made camp beside it, stretching my hammock between two alders, watching the last colors sweep across clear sky through the silhouette of leaves rustling in breeze.

I woke up to drops of rain falling on my face. It was pre-dawn, a steely grey sky, stars obscured by clouds. The faint sounds of rain on leaves blended with riversong and the cool wet on my face. I grumbled something to myself, and spun from my hammock. The song of earth rose with the parting of clouds, early rays falling on damp earth.

I have learned the song of thirsty land for water.

Following the Clearwater from the desert, its cold telling me stories of mountains. Hot day riding, traffic neverending. Beauty everywhere, never the space to enjoy it.

I camped that night exhausted. I lost my jasper necklace swimming in the river. Something about cool stone against your chest always keeps you grounded. A wave of despair caught me in my tent that night, homesick aching through my body. 700 miles from home, nearly broke, without a plan. I let the sadness wash me, up and down with wave breaks. Night came starless, darkness enveloping.

I woke to raindrops on my tent, and a cool breeze outside. Whatever weight I was held by the last night had left me. There was a sense of levity I felt, as if I had found some sort of nothingness to grow from. From the bottom, everywhere you go is up.

The road continued upward too. The further I went, the bigger the trees got. The town of Kamiah greeted me with plum trees; full, sweet, juicy explosions of wonder each one of them. Clouds hung, and rain began to fall as I sat to drink coffee in a cafe. Warm stillness apart from the cool grey outside, tonic to my soul.

I left town when the rain stopped. A mile down the road, a truck blasted its horn as it passed me, raising blood into my ears. Then it pulled over. I was somewhere oh shit and furious when a giant native dude stepped out. And then I recognized him. His family was selling meat in Joseph the week before. I had asked for some smoked salmon, and they didn’t have any.

“You came all the way up here?” his face mirrored his bewilderment, “my truck barely makes it up the rattlesnake.”

“When you are at the bottom, you don’t have much choice”

“That’s more than I’ll ever do, but it’s good to see you doing it.” He reached to pull something from a cooler in the back of his truck “This ought to keep you going”

He handed me two chunks of salmon, smoked and wrapped. We said our goodbyes, and I cut into the container with my knife. The fish flesh broke apart in my fingers, brown with beautiful orange center. It was candy sweet and so rich, filling my mouth with riversong. Diesel fumes left a cloud as the old truck rumbled off.

The next town was Kooskia. A mulberry tree had a perimeter of dropped and dried berries, so sweet and delicious. I picked the to save for later. The day was getting hot. Someone on the street told me the temperature reached 112 the previous week, hotter than they had ever seen it. There were clouds overhead and the ground was still thirsty. I left in late afternoon to raindrops, and shared salmon with a cyclist from Chicago heading to Portland. More plums and rocky bluffs. The river called me and I went to swim, jumping in to sweeping cold currents of life. Wash my troubles downstream, clear river.

The forests grew greener as I moved upward through the evening. Big clouds scraped mountaintops. I stopped for some huckleberry ice cream in Syringa and found myself surrounded by beautiful women. Perhaps heaven is not so far away as we think.

Leaving, the air was heavy. I was tired. Big clouds rolled overhead. I found a cedar grove by the riverside. Another traveler was there, a pilot on his way to Glacier. 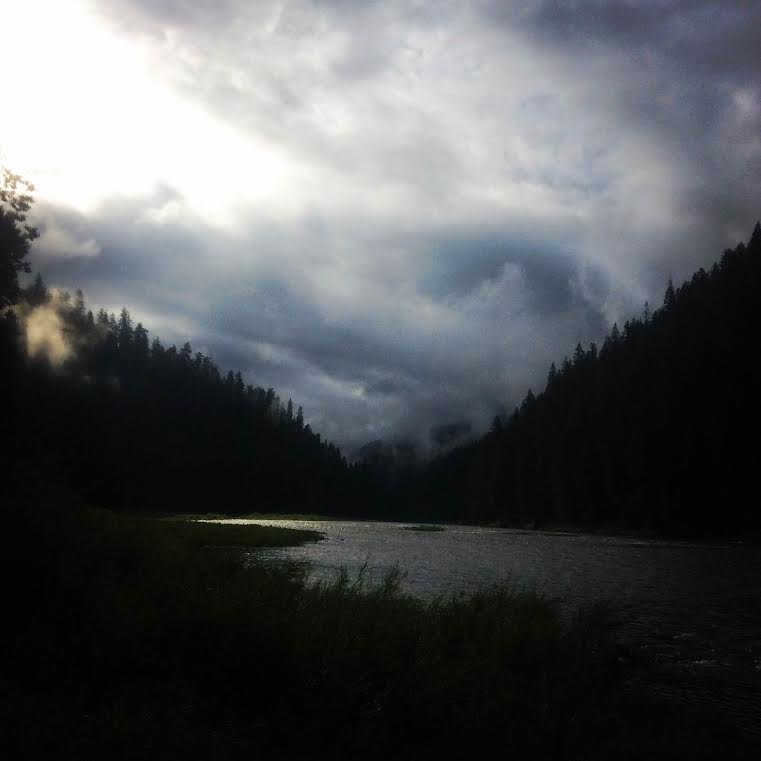 I set up my tent, and was starting to cook dinner when the heavens opened. A flash of lightning lit everything outside the grove, immediately followed by overhead rolling thunder rumbling. A few raindrops at first, then downpour. The canopy held water for a moment, till it began pouring through. Pour and pour it did. More lightning flashes and overhead roaring, sky speaking to thirsty land. “What you need, you shall receive,” they say. All received is through grace, and the earth sings gratitude. Pour on, till puddles flow into rivers and all life’s thirst is quenched. River, roll deeper, more vital and full of life, that the grace of water may flow cyclical through us all, till we are drenched to the bone. A drenched dinner I ate, hot grits for the body, water for the spirit. Poured over till my coat soaked through, no barriers can hold back a force of nature indefinite. Forever rain, running through soil, cutting new paths downward, new stories of the cycles of water. Songs of a thirsty land given water. Thirsty land, thunderheads, rolling water, and me; all of us singing songs of grace that brought us to life. That nourishes life. That is life. The songs of the vessel and the emptiness within.

It is through thirst that we learn to be quenched.

I have learned the song of thirsty land given water