Home How to How to set a climbing route

How to set a climbing route 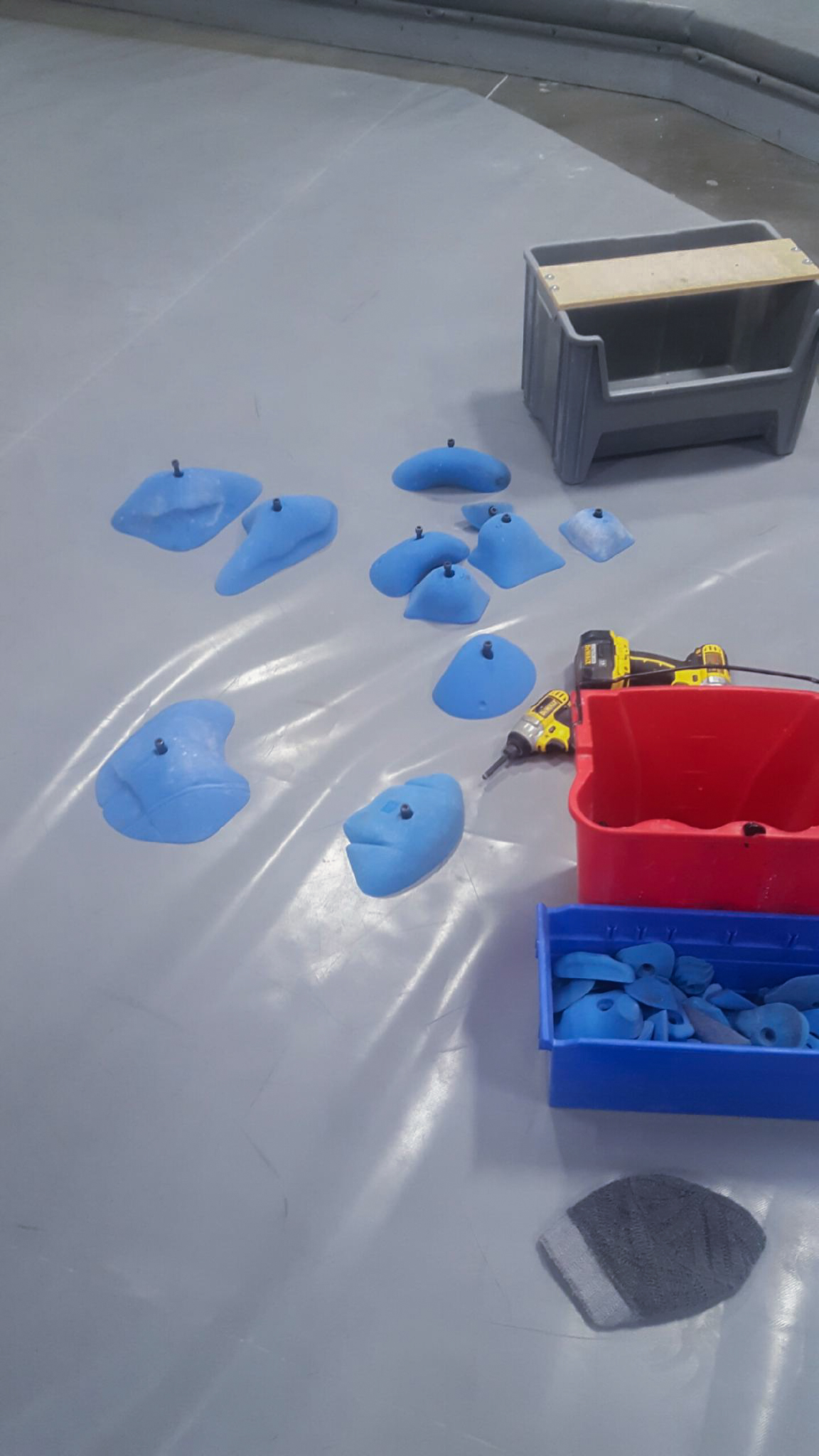 Ever wondered what goes on behind the scenes of that route or problem you love to send at your climbing gym? I did, which is why I recently sat down with a few route setters from The Rock Boxx and Western Oregon University’s climbing wall and talked to them about what it takes to set a climbing route. And it isn’t easy; these route setters work hard to make sure what they set is fun, climbable, and enjoyable for climbers of all skill levels. Here is a little peek into route setting and the work that goes into it. Enjoy.

In North America most routes and problems, set either inside a gym or at a crag outside, are graded by two different systems: the Yosemite Decimal Rating System (YDRS) and the Hueco Scale (also referred to as the V Scale). These two systems categorize routes based on technical and physical moves the climber must make during the climb. With the YDRS, a system used for sport and trad climbing, the routes are rated from 5.0-5.15, where the Hueco Scale, used to grade bouldering problems, goes from V0 – V16. Of course these ratings can expand as climbers continue to push boundaries and explore the realms of the sport; V17 has already been proposed but is yet to be confirmed. The higher the climbing grade, the harder the climb becomes. For example, a 5.8 utilizes holds such as large jugs and pockets – holds that are easy to grab and hold on to. A route rated at 5.11, however, will see holds like crimps and pinches and slopers, and will demand good technique and a high sense of body awareness from the climber.

Route setting is a complicated process for many reasons: which holds to use, what grade the route will be set at, which area of the wall to set on, and how the route will look going up or across. Is there a section of the wall that contains more features? If so, how does that affect the holds you want to use? Are there overhangs? How will that affect the grade being set? These are just some of the questions setters have to consider before actually setting.

Another aspect of setting that makes it tricky is how subjective the grading system is. For example, Daniel Struble, a climber who used to set at WOU, said, “Many gyms in the US use YDS and/or Hueco systems, but many use their own systems, like The Rock Boxx, and some don’t use any rating systems at all: U of O’s bouldering area, for example. These tend to encourage people to climb on things they wouldn’t otherwise try because they got scared off by the numbers.”  Katie Nance, another setter at WOU, said there is a disparity between climbing a 5.10 at Western’s wall vs. climbing a 5.10 at Planet Granite or Portland Rock Gym. Furthermore, when I climb a 4 at The Rock Boxx, which does not use the V Scale, just a system related to it, it feels like a V3 at WOU. These differences do not take away from the legitimacy of the routes, however; it is just one more obstacle for a route setter.

The process of a route being set depends entirely on the person who is setting it. Zander Albertson, who has set at Western Oregon University, says he usually has an idea of what he wants to do while still on the ground. These ideas can be anywhere from the need to set a certain grade, a crux idea (the hardest section of the route) that he sets first then builds the rest of the route around, to a theme, such as crimps, slopers, pinches, etc. Jon Snyder, a setter from The Rock Boxx, says “it varies quite a bit for me. Sometimes I find a group of holds that I think would be fun to use together. Other times I have an idea for a string of moves and then have to find the holds that make that possible.” He added too that some of his inspiration for routes comes from climbing outside and seeing movements he thought were interesting. 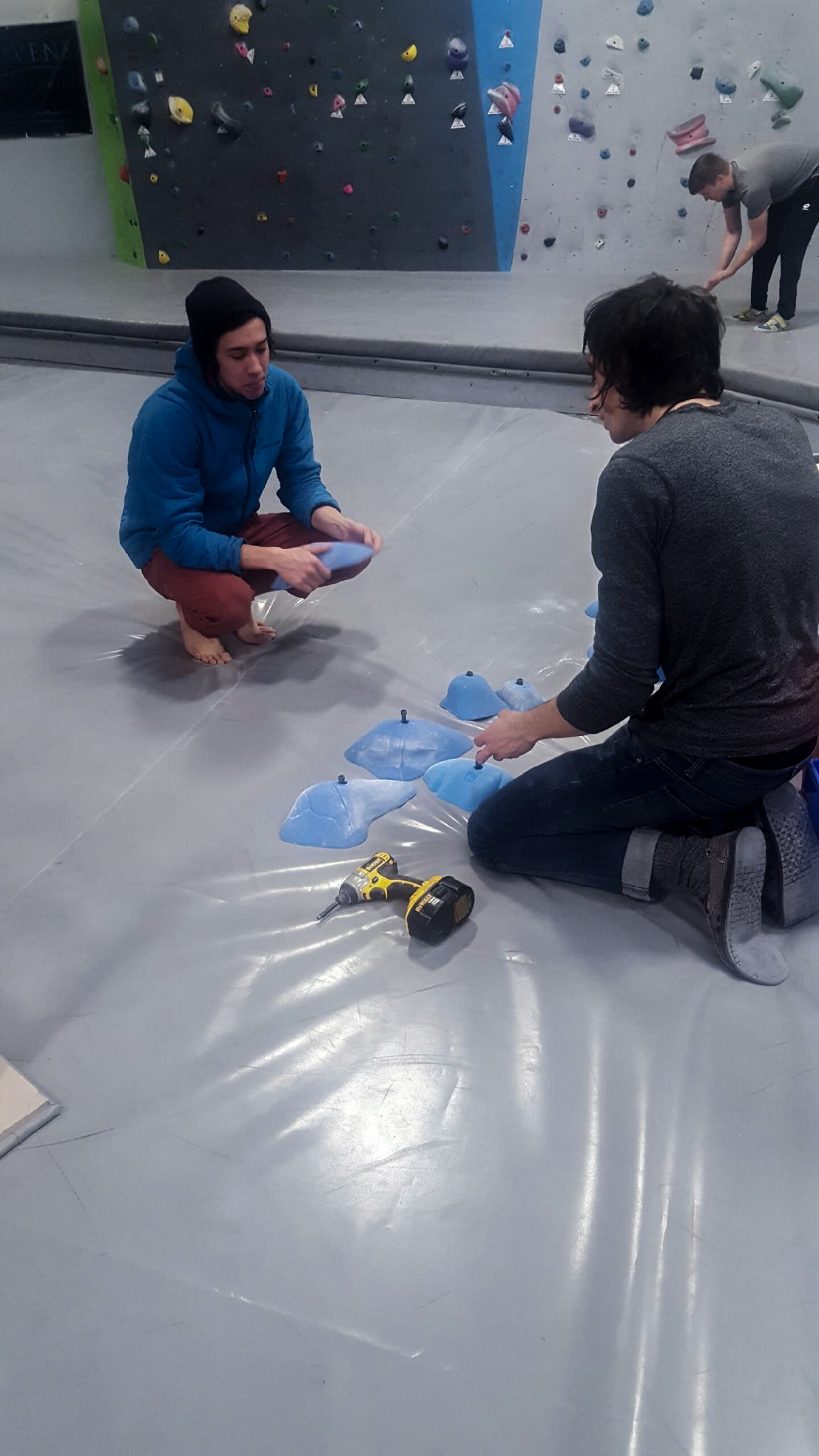 I visited Snyder and Jon Chayse, another setter at The Rock Boxx, when they were setting a 5 with moves inspired from a problem at Smith Rock. The first thing they did was lay out all of the holds they were going to use, which in this case were all slopers, a hold that is smooth and requires an open-hand grip (think of holding the round side of a bowl). As they set up, they explained to me that their gym tries to set holds that are consistent with one another so it flows better. Not all gyms are like that but at The Rock Boxx it helps to create a unique, congruous style throughout.

Starting out, Chayse and Snyder set the move inspired from Smith Rock and then set the rest of the holds around it. After setting a few new holds, they would each climb what they had up so far (this is called forerunning the route) to see how it flowed and if they needed to change something – which is almost always the case. Chayse said that forerunning a route is important because if one move of the entire route is a 6 move but the rest of it feels like a 2, the setter can go back and change the route to make it more consistent. It is not uncommon for the setter to have an idea in mind only to realize halfway through setting it that he must change a move or hold to better accommodate the route as a whole.  Albertson added that when making changes, “commit to a small change, try it, then adjust some more. Much more time efficient.”

All of the setters interviewed agreed that their climbing styles do influence many of the routes they set; if you have a climber who likes dynamic and powerful movements, his V3 is going to feel much different from a more technical and balanced V3. Establishing how a certain grade should look or feel is subjective – just like grading a route is, especially since all climbers, at some point, develop a distinct style. Sierra Johnston, a route setter at WOU said that, “there can be some discrepancy with what a skill level entails, you can have a 5.10 route that can be completely different from another 5.10 route, depending on the holds and movement you as the route setter have put on the wall.” For instance, there is a 5.10 route I climb at WOU that has terrible footholds, is reachy and involves some dynoing, a climbing move which involves a jump up to the next hold. I struggle on this route every time because that style of climbing is not what I prefer. But there is another 5.10 I climb often (and really enjoy) that requires more balance and foot-hand matches, and is more technical. These routes are both 5.10s but feel very different from one another because the setters who set them each have an individual style they like, both for climbing and setting. But Struble did point out that “being a route setter you set for everyone, not just for yourself, and since being forced to set in a lot of different styles I think I’ve become a much more well-rounded climber.” 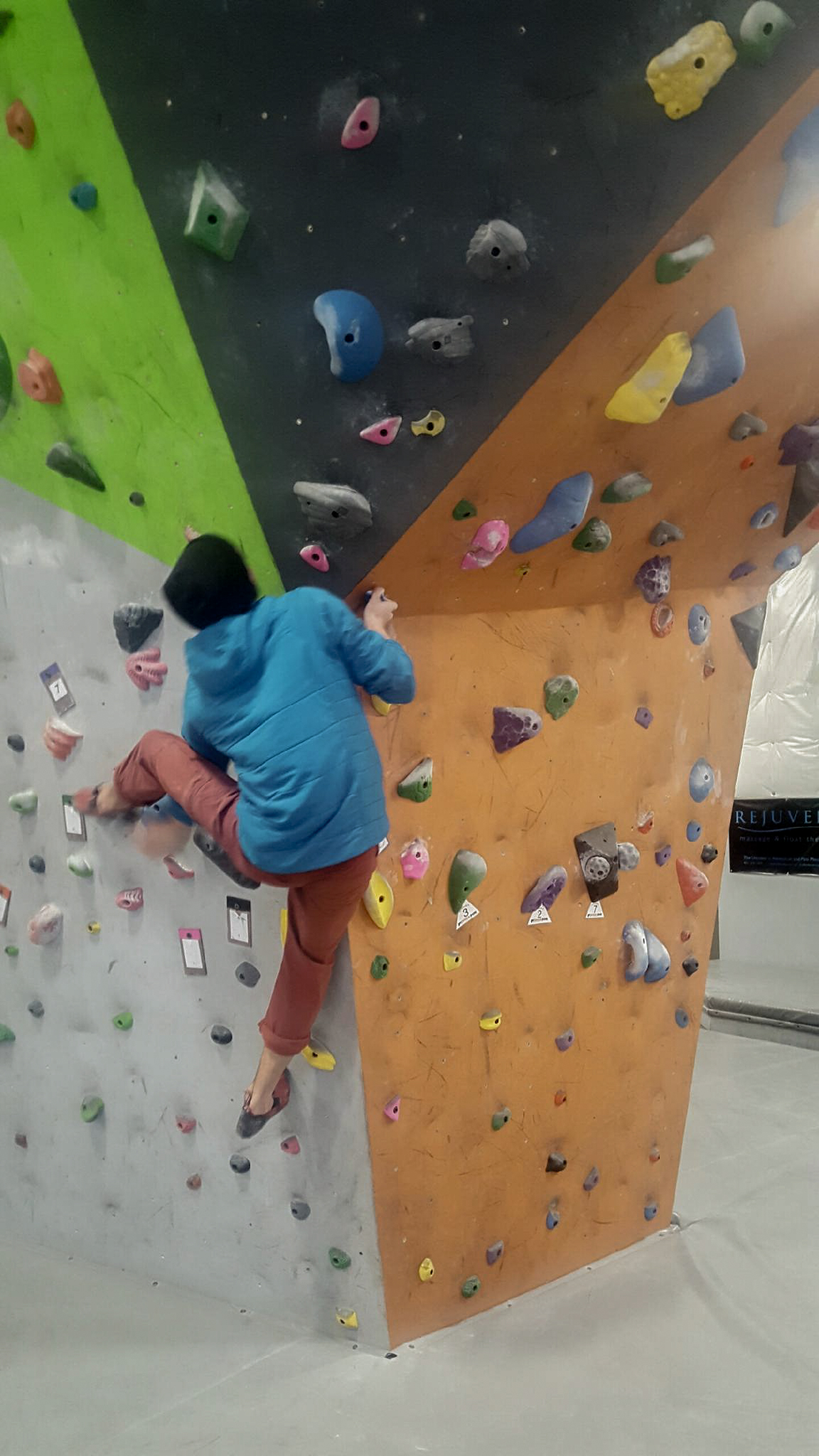 Snyder tests out the new route

One of the best ways to arrive at a consensus is letting a lot of people climb your route and offer feedback. Albertson said that when he set his first route, “it was awful” but a few months later he set a route that quickly became one of the most climbed routes at WOU. Johnston piggybacked on this, saying that she was so embarrassed by one of her first routes she took it down a month later. It is a learning process and like anything, the more you do it the better you will become. When learning how to set, “the basics carry you a long way,” Snyder said. “Understanding climbing technique opens a lot of doors for creativity.”

Prior to writing this blog I didn’t realize all that went into setting a route. It’s impressive, the work and knowledge of climbing a setter must have. None of route setting sounds easy and next time I see a setter I will most definitely be thanking them. Johnston said that route setting is artistic and I think she’s right: there’s a certain art that comes with it; much like a painter takes a blank canvas and produces something beautiful, a route setter sees a blank piece of wall and utilizes it to construct something that, when climbed, can have the ability to look like a dance.